Since the darkness has been invading more and more of my morning, my yoga routine has gotten a bit sidetracked. People forget that when they celebrate the winter solstice as the coming of the light, there are months yet remaining in the lengthening of darkness in the morning. Accordingly, like the light, I prolong my snooze time too. I rationalize that it won’t be light for several more hours, so I can still fit in yoga before sunrise.

Nevertheless, I do get a good substitute for my 4am yoga at least once a week when I have to shovel snow for my husband to get out of the driveway for work. Except, when it’s 4am and the wind is blowing the snow back in my face with every shovelful I feel more and more like Sisyphus and I can’t see for the snow/scarf/moistened breathy wind that has frosted my glasses, and remember that it is 4am and dark. I don’t call it yoga. I call it white tantric. I purge all my anger and frustration with the snow and despite the warning signs that near hypothermic states can cause mood disorders nicknamed the “umbles” (stumble, grumble, mumble), the grumbling and inner shouting I do at 4am is all about cleansing the psyche.

Ah, but you love the snow you remind me. Hmm, ‘tis true and this stuff is light as a feather when it comes down, looking all foamy and cleansing the air and the land and what not with its blanket of whiteness. But it is only January and my wrists are developing shovel tendinitis. Sure, in the afternoon after I clear the lumps of sand filled mini boulders that have accumulated at the front of the driveway I go for a walk. If I can look up without upsetting the delicate ratio of face to scarf to glasses coverage I can see a small portion of blue sky and an ironic sun and 7degrees Fahrenheit doesn’t feel so bad, because it is a dry cold you know. And life is good and crisp outside and for a little while I will feel warm indoors and listen to the chirp of a new bird, the recently vacated upstairs apartment has an old battery in their smoke alarm.

* Does anyone else still call these long johns?

It isn’t easy to smile when it’s -30 degrees Celsius, for one thing, if you do, you may get your tongue stuck to your teeth as if it were a flagpole. Well, nothing quite so dramatic as that, but your lips will dry out surprisingly fast and chap the wits off them.  Cold air stings your lungs and your pants freeze like crispy fried dough.

A few years ago there was an incident when a dead car battery made me run a mile at 1am in -18 degree weather. That jog made me remember real cold, made me remember that jeans freeze up and then you awkwardly maneuver your legs so as not to touch the frozen cardboard surface if you are not wearing long-johns.* That was an experience not to be forgotten and it brought back memories from my youth of long waits at the bus stop, precariously exciting walks on frozen ponds and adventures in the woods involving guard dogs and neighbors with shot guns and chips on their shoulders.

Now that I live in Canada I am re-experiencing the cold of my younger years in New England. Now I wear two or three pairs of pants, even while indoors with the heat on. Now even the cats get a blanket, in the living room. My circulation has not improved with age and although I bear it, my attitude is more along the lines of “count to 10 and the cold will soon be over”. This is nonsense of course, winter lasts only six months in southern Ontario. However, as an adult without outdoor responsibilities I can limit my exposure and grumble away from long outdoor conversations, and, rather than tugging on my husband’s sleeve when he lingers too long near open doors, I just walk back inside. Even so, this morning just from sitting in a slightly warmed vehicle I swore I could have gotten frostnip with my gloves on. (Note to self- buy thicker gloves or wear two pair.)

It used to be that we felt a sense of personal satisfaction from enduring the elements, the old “I walked 10 miles to school in 2 feet of snow uphill…” kind of thing. That went out of style once fleece jackets were born and gave us soft skin like upright fleece sheep. Then along came microfibers and winter fashion. Winter fashion is abhorrent stuff. Everyone should look like a stuffed badger in the winter, not sleek NY, Trinity-mimicking race car driver types. I also think I threw smugness in a corner when I recall camping in South America and just the memory of the half-frozen dew soaked night runs shivers through me.

Still, a small warm ball of community pride will rise up in respect of plummeting temperatures and rising snow fall amounts in my town even whilst I sat warm and dry in my home. To understand this you have to know that we have a longstanding yet unspoken competition in my family about who had the “est” of weather- the lowest temperature, the highest wind chill, the deepest snow. Just the town having extreme weather is enough to put cheese on that cracker. The weather jousting is the longest part of our family conversations. It begins and ends every phone call and percolates into a significant portion of our short visits. It is the most animated my mother gets in a conversation that isn’t about my father. My eyes roll and widen with every claim and for years my mild Massachusetts weather could not stand up to my mother’s coastal New England hurricanes or my brothers northern Vermont cold. But then I moved to Canada.

North. I never thought I would move farther north than my brother. But soon I started edging him out on cold temperatures, even by just a few Celsius degrees. Pride rose up within me. He could get frostbite on a hike, I could get frostbite fetching the mail. I moved into a region that was even colder than my father’s memories. Only yesterday he emailed me telling me of his youthful adventures on lakes of 3 -5 feet of ice spinning cars just for the fun of it. “Much colder back then” he declared. “Well, not colder than Canada” I retort. I’ve always been skeptical of anyone who says “the snow was up to here” while pointing to anywhere above the knee. Now, in an effort to raise my one-upmanship I can check the internet to confirm or belittle those boasts. Sure, “that’s just in the drifts” I counter, usually under my breath. In response I might hear an almost inaudible “hmmph” or sigh from the other end of the phone line. Passive aggressive, I check online. This is as close as my family gets to banter. Later, for the first few seconds I may go outside and think, it’s not so bad, until I have to touch a doorknob with my bare damp hands. 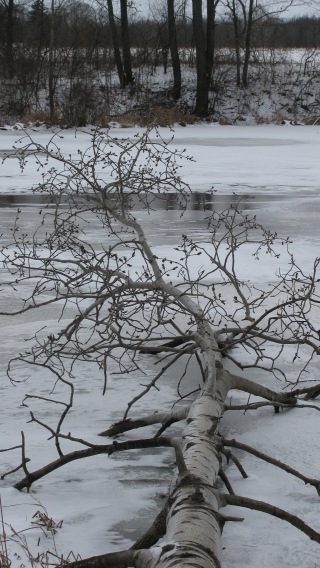 Winters colors. Beyond the white out conditions and the grey skies on less dramatic days there are many colors to be found in winter and they brighten my spirit with their boldness. 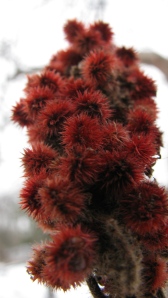 Does anyone know what each of these are? The red berries may simply be called winter berry and the orange may be bittersweet.

What wondrous things are you finding outside in winter?